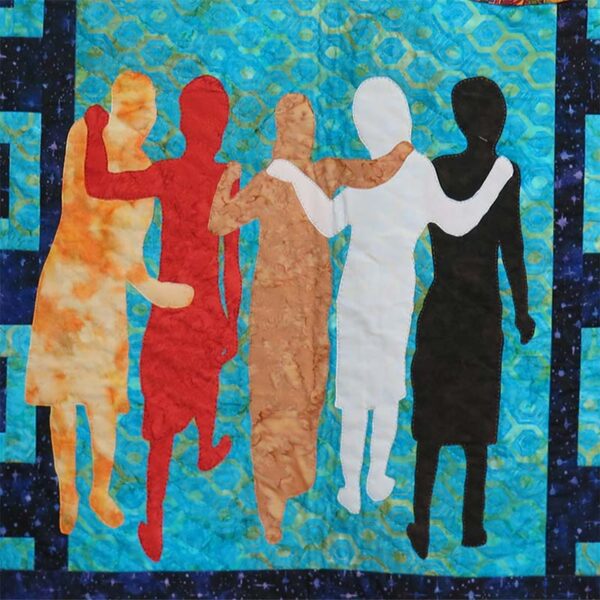 This annual juried exhibition features works in fiber created by 25 African American artists from 11 states. The challenge for the 15th installment of the exhibit was for artists tocreate fiber art pieces that show what an inclusive future looks like; pieces that envision a society free fromthe bondage of oppression—both physical and social. True Social Justice imagines a future void of racist and bigoted thought and the structures that violently oppress minorities and marginalized communities.Featured works visualize a future where better conditions exist for all generations of people through the use of technology, art, literature, and more. When a narrative is embedded with those visuals it takes on amore powerful connective tissue. THAT is full social justice. Curated by award-winning and nationally exhibiting textile artist, Torreah “Cookie” Washington, this unique exhibition offers African Americanfiber artists an opportunity to showcase their original and innovative designs executed in a variety oftraditional and non-traditional fiber techniques. 

Following the close of the show, up to 20 works will be selected to tour the state through the South Carolina State Museum’s 2022/2023 Traveling Exhibitions Program. Sites across SC may request the exhibit to tour in their facilities, thus providing additional exposure for the artists.

We are pleased to welcome back Torreah “Cookie” Washington as the curator for this annual exhibition. Cookie is an award-winning master art quilter and curator. She was born in Rabat, Morocco, and has traveled extensively, creating with textiles for more than a quarter of a century. A fourth generation textile artist, Cookie’s mother, grandmother, and great grandmother were all experienced quilters, fashion designers, and master tailors. Cookie has lived in the South Carolina Lowcountry  for 30 years and is excited by the now thriving arts community. Her current passion is fiber art muralism that celebrates the Divine Feminine and the contributions of her African ancestral heritage. 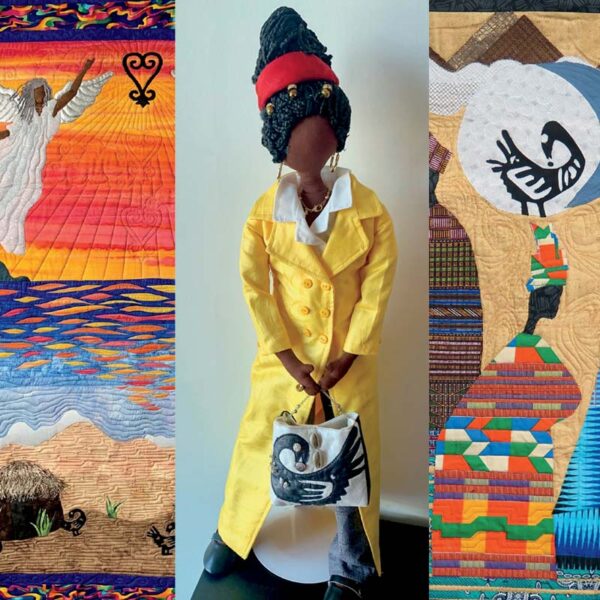 This annual juried exhibition features works in fiber created by 37 African American artists from throughout the United States.

Sankofa is a word in the Twi language spoken by the Akan tribe of present day Ghana. It is associated with the proverb, “Se wo were fi na wosankofa a yenkyi,” which translates to “it is not taboo to fetch what is at risk of being left behind.” Today, it is more simply interpreted as “go back and get it.” Sankofa also refers to the Asante Adinkra symbol used by the Akan people to represent the same idea, with one version appearing as a stylized heart shape and the other by a mythical bird with its feet firmly planted forward, its head turned backwards, and its mouth carrying a precious egg. Both the word and the symbols represent the concept of remembering our past in order to protect our future. The challenge for this year’s exhibit was for artists to create a pictorial fiber work that illustrates the idea of sankofa. Entries must incorporate one of the two sankofa symbols (heart or bird).

Organized and presented by the City of North Charleston Cultural Arts Department, and curated by Torreah “Cookie” Washington, this unique opportunity offers African American fiber artists a showcase to exhibit their original and innovative designs. Following the close of the show, up to twenty works will be selected to tour the state through the South Carolina State Museum’s 2021/2022 Traveling Exhibitions Program. Sites across South Carolina may request the exhibit to tour in their facilities, thus providing additional exposure for the selected artists.

Welcome to SANKOFA, the 14th Annual African American Fiber Arts Exhibition on view at North Charleston City Hall. This year’s theme is inspired by this quote from the enslaved prince Cinque:

“I will call into the past, far back to the beginning of time, and beg the Ancestors to come and help me at the judgment. I will reach back and draw them into me. And they must come, for at this moment, I am the whole reason they have existed at all”.

The meaning of the Sankofa symbol is “reach back and get it” or “look to the past to understand the present.” I asked the artists to include the Sankofa symbol in their works. It is typically presented in one of two forms — one version shows a bird with its head turned backwards placing an egg onto its back, the other shows a heart with ornate endings. The Sankofa is one of the most recognized of the many Adinkra symbols.

Adinkra symbols were originally created by the King of the  Bono people of Gyaaman, an Akan people of Ghana, during the early 1800’s. The King’s name was Nana Kwadwo Agyemang Adinkra and he originally created or designed these symbols and named them after himself ‘Adinkra’. Adinkra symbols express deeply symbolic proverbs related to life, death, wisdom, and human behavior.

Interestingly, research shows that these symbols made their way into the designs found on wrought iron gates and fences created by enslaved people from West Africa who worked as blacksmiths in Charleston, New Orleans, and other cities throughout the United States.

As you view the exhibit, see if you can spy the Adrinkra symbol in each piece.